After Shaul Guerrero (Raquel Diaz) wrote the following on Twitter: “Thank you all for your love and support, WWE has been one of the highlights of my life. I learned so much and consider them family.” it seemed like it was yet another NXT Diva’s chapter closed too soon.

However, Guerrero has been blowing up dirt sheet headlines all week with various topics about her possible WWE future.

The most recent ones being that she is still employed with the WWE, and has just left the developmental territory. The rumors state that Shaul Guerrero might just need a break from everything, and WWE officials are hoping to get her back asap. Which would be a positive for anyone who has watched her character transform into something the Divas division hasn’t seen lately.

Although that is a positive rumor, there are some that may not be so pleasing. Some dirt sheets have also reported that Shaul is planning to go back to school.

Either way this is surely not the last time we hear Shaul Guerrero (Raquel Diaz’s) name in the dirt sheets.

However fans did not want to believe this right away because a heel blonde was revealed as the attacker from NOC. Brad Maddox was removed from the website and promoted to the main roster as a referee, so the idea wasn’t that far fetched.

Today WWE star Vickie Guerrero, the mother of Raquel Diaz, has confirmed that her daughter has indeed been granted a release from the company. Vickie also wrote that Diaz asked for her release due to a personal issue.

Sending the best wishes to Raquel Diaz in whatever her personal problem is, and hope that maybe one day the exfoliating ugliness tour will take a second go.

She debuted at FCW houseshows a few weeks ago, teaming up with Sofia Cortez, Paige and Summer Rae on different occasions.

It is being said that Officials and some people in Developmental are excited about the future of the WWE Divas division and are happy with the group of Divas they have in FCW.

Now that FCW tv tapings have come to a close, and the stars are now on WWE NXT programming – lets take a look back at some of the jaw dropping matches in FCW.

#11 – October 9th, 2011 – Naomi took on FCW newcomer Leah West. Leah put up a hard fight against former FCW Divas champion Naomi. Naomi was able to pick up the victory, sadly for Leah – this was her last match in FCW.

#10 – July 31st, 2011  – Naomi took on Sonia w/ Audrey Marie at ringside. Sonia, also a FCW newcomer at the time, was no match for Naomi it seemed. Within a short time Naomi was able to pick up the victory. 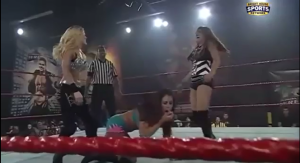 #9-  April 3rd, 2012 – Triple threat Divas championship match, the champion Raquel Diaz taking on Sofia Cortez and Audrey Marie. This was the first of many triple threat matchs under Diaz’s championship reign. Cortez, recently debuted before this match and Audrey had just lost her championship which made them want to impress while Raquel just wanted to hold onto her prized possession.

#8- September 25th, 2011 – Audrey Marie vs Aksana for the FCW Divas Championship. Audrey had 2 victories over Aksana the weeks prior, and Aksana was set out to prove those were flukes. While Aksana went for a spine buster, Audrey was able to roll through, get the victory and win her first FCW Divas Championship. 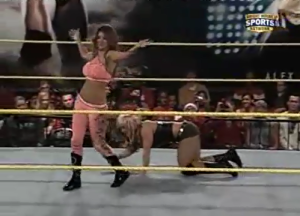 #7-  January 16th, 2011 – Rosa Mendes took on Kaitlyn. Rosa, was brought back to FCW to ‘regain’ the Queen of FCW crown that she desired. While Kaitlyn was a standout and winner of NXT’s season 3. These two clased in a battle of strength and fire. Kaitlyn picked up the victory with her new finisher the flatliner. 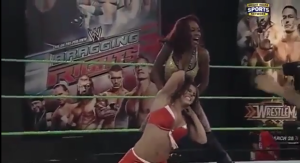 #6- January 15th, 2012 – Caylee Turner took on Audrey Marie for the FCW Divas Championship. Turner was a standout on WWE’s Tough Enough series, while Audrey Marie was doing a great job defending her Championship gold. In a match full of outwitting, Audrey was able to come out on top with a victory.

#5- June 10th, 2012 – Audrey Marie took on Paige w/ Sofia Cortez at ringside. The two were named possible contenders for the Divas championship the previous week by GM Summer Rae. While Marie was going for a roll up, Sofia made sure Paige was loosing this match – removing her hand from the ropes. Giving Audrey the win and a future shot at Raquel’s Divas Championship.

#4-  May 27th, 2012  – Raquel Diaz took on Paige w/ Sofia Cortez at ringside. The two generation Divas battled it out for the FCW Divas Championship. Although a miscue by Sofia lead to a chair being thrown in the ring – Raquel in typical Guerrero fashion played possum while Paige caught the chair. Leading to a DQ and Raquel retaining the championship.

#3-  March 13th, 2011 – Rosa Mendes took on Aksana for the Queen of FCW crown. The whole point of Rosa’s FCW return was for her to capture the crown and Aksana was standing in her way. To anyone who says Rosa can’t wrestle… they need to watch this match. In a battle of strength and power – these Divas showed that the crown was just as important as the Divas Championship. Rosa Mendes finally picks up the victory and wins her first ‘title’!

#2- July 15th, 2012 – Audrey Marie vs Paige in the first ever FCW Divas NO DQ match. For the last couple of weeks of FCWtv these two Divas have fought to pinfalls, dq’s until they made FCW history books. In a back and forth battle, the ref couldn’t stop these two from hurting eachother. Paige attempted to use a chair to no evail, Audrey ended up planting a huge ddt out of nowhere to secure the victory over her foe.

Rumors are circulating, that their is strong praise for 3 of NXT’s Divas – Sofia Cortez, Paige and Raquel Diaz.

It is being said that WWE officials believe Paige and Sofia are better wrestlers than many of their current  WWE Divas. Although the praise, some believe Paige will be a future star, and that she is too young to be on the main roster now.

Raquel Diaz is gaining praise due to her mic skills and personality. Diaz has continued to gain praise due to the fact she can make promos on the spot. Her character spills out multiple promos, however WWE officals believe her ring work is not perfected yet.

Raquel and Paige are both generation Divas, Diaz being apart of the Guerrero Legacy- while Paige comes from England’s Knight Dynasty.

Not to count Sofia out, Cortez has trained with the Colons in Puerto Rico. Caylee Turner and Audrey Marie have competed in 1 match so far on WWE NXT, that has yet to air while, Summer Rae who recently started her wrestling training, has yet to have a taped match. Without a doubt, once WWE catchs eye on the other 3 Divas, it will surely be a race to the top of NXT and soon the WWE.

Raquel Diaz, the daughter of Eddie and Vickie Guerrero has made FCW History as the longest reigning Divas Champion.

The record was previously held by Naomi, the first ever Divas Champion at 189 days.

Raquel Diaz lost her Divas Championship last Friday to Caylee Turner but not before writting her name in the history books. The amount to beat is now 197 days.

Caylee is known for ranking 5th on WWE’s Tough Enough series and is also the sister of Smackdown Diva Alicia Fox.

The announcment was made by Tough Enough and FCW head trainer Bill Demott via Twitter: ” New #FCW Divas Champion @WWECayleeTurner !!!!! What a show we are having! ”

Soon after the show ended Caylee took to twitter to share her excitment over holding her first Championship in her career: ” Thanks everyone so much! I’ll wear the title proudly! Shows you really how far hard work, people believing in you and passion can take you! “