Although it was never confirmed by the Flawless one, FCW president Steve Keirn announced ‘Undertaker and Michelle were expecting their first child’ at FCW Dallas Bull show (when Taker was signing autographs).

BIG Congrats go out to Michelle McCool and Undertaker on their newborn!! 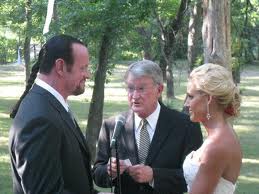 When a photo was leaked of Undertaker and Michelle McCool’s wedding, fans expierenced a lot of thoughts…. they might have similar ones on the recent story involving this couple.

Vickie Guerrero planted the thought in peoples heads this March, when she congratulated McCool on her ‘bundle of joy’.

Last night at FCW’s Dallas Bull show, where Undertaker was signing autographs, Steve Keirn (President of FCW) broke the news to the people in attendence. In live reports, Keirn congratulated Undertaker and his wife Michelle McCool on their first child.

This will be Michelle’s 1st child and Undertakers 4th child.

Michelle, was 1 half of the Diva duo LayCool – with current WWE Divas Champion Layla.

Fans are excited about the news and are hoping that if she appears on air, it will be some sort of LayCool reunion.

#11 – It pains me to put such a ppv as Wrestlemania dead last…. but if you remember Snooki, Trish Stratus and John Morrison defeating LayCool and Ziggler you’d put it last as well. There were so many possible matchs but, WWE decided to once again drop all of that and place a celebrity in there. Michelle ended up taking a ‘Snooki splash’ & the match ended.

#8 – Summerslam, The biggest party of the summer showed Kelly Kelly vs Beth Phoenix. This was the first of their many ppv battles in 2011. Beth went in as the odds on favorite but, Kelly was able to counter that with a rollup. Kelly Kelly retained her Divas Championship.

#7 – Money in the Bank, Kelly Kelly vs Brie Bella. The newly crowned champion Kelly had to defend her title soon after she won it on a special ‘Power to the People RAW’. Nikki and Brie attempted twin magic but, it did not work as planned. Kelly Kelly retained her Divas Championship.

#6 – Night of Champions, Beth Phoenix vs Kelly Kelly. When you hear New York & Beth Phoenix together you assume the obvious she was the odds on favorite to win. Lets go buffalo and Beth Phoenix chants rung throughout the arena. The standout moment in this match, Beth Phoenix did a top rope superplex… something that many Divas have not attempted. Kelly Kelly was able to once again rollup Phoenix and retain her Divas Championship.

#5 Royal Rumble, a fatal 4 way for the Divas Championship- the reigning champion Natalya, LayCool and Eve Torres. If you wanted hard hitting action this was the ppv for you, it had everything from moonsaults to double sharpshooters. Contriversy happend when both Eve and Michelle had 3 counts on opposite sides of the ring, the ref who was facing Torres said she won. Michelle was not happy about it….well neither was Layla and Natalya (Eve was a added entant). Eve became the new Divas Champion.

#4 Vengence, Beth Phoenix vs Eve Torres. After Beth defeated Kelly on multiple occasions, Eve decided to step up and brought the fight to Beth. Countering Glamslam after Glamslam, Eve was able to stick Beth in a triangle choke which brough the champ to her knees. One mistaken Moonsault cost Eve the match as Beth was able to pick her up, and plant her on the mat. Beth Pheonix retained her Divas Championship.

#3 H.ll in a Cell, Kelly Kelly vs Beth Pheonix. This was Beth’s final shot at Kelly Kelly’s championship and she worked hard for it. Kelly was able to take advantage multiple times throughout, but it all came crashing down with one big Glamslam. Beth Phoenix became the new Divas Champion.

#2 Survivor Series, Eve Torres vs Beth Phoenix in a lumber jill match. I honestly think this is a tie for the top spot, this match had everything – interaction with the lumberjills, power moves and submissions. The standout moment for this match was when Beth Pheonix climbed to the top of the ropes and planted a super Glamslam, the Divas and the crowd were left in shock and awe. Beth Pheonix retained her Divas Championship.

#1 Extreme Rules, Layla vs Michelle McCool. This match is in the top spot for multiple reasons – it was a loser leaves WWE match and NO DQ. For multiple weeks prior to Extreme Rules, WWE showed LayCool spliting up – fighting, arguing, costing matchs. Each Diva kicked out of finisher after finisher, the crowd was into this feud from the fallout (Smackdown before ppv). During this match Michelle already had a injury to her foot, and Layla suffured a torn ACL/MCL. Layla ended up picking up the victory via rollup, but the emotion that spilled out of each Diva following the bell sound was something that hasn’t been matched yet. Michelle McCool’s final WWE match as a competing WWE Diva. Kharma’s music sounds and her she comes for her debut, laying out McCool with the Implant Buster. Extreme Rules wins the 2011 ppv lineup in my eyes.

WWE Divas Champion Layla has been given a new theme song, ever since her return at Extreme Rules she has been using former tag partner/Diva Michelle McCool’s ‘Not Enough For Me’.

Starting two weeks ago on RAW, when Layla introduced Cyndi Lauper and Wendi Richter to the ring, former Diva Tiffany’s music ‘insatiable’ was playing. Tiffany stated on Twitter she was happy the song was being used because it was good.

It was made officiallly her song during her match against AJ, last Friday on Smackdown. Many fans believe that the song does not fit Layla, the way it fit Tiffany.